Number one skin care clinic in Lincoln – Beauty Laser Clinic. We provide a range of treatments and offer medical, quality care that will ensure to please the needs of our clients. If you wish to get your tattoo removed book your appointment now at the Beauty Laser Clinic.

We have all rights reserved and can remove unwanted tattoos ink for different skin types and body areas. This tattoo process is safe for most parts of the body including the face and other sensitive areas of the body.

The therapist is professional and will ensure to provide medical tattoo treatment that will help to give you the results that you want!

We are going to be using the leading in dermatology Nd: YAG type of laser which is the best and most suitable technology for tattoos ink removal.

About two hours before, the client should use EMLA or AMETOP numbing cream which will be removed before the laser tattoo removal treatment. Also, the treatment area needs to be shaved in order to remove the tattoo inks successfully.

The laser device will be pressed against your skin to trigger the laser light. This may result in a burning sensation which can be described as an elastic band being ‘snapped’ against the skin.

Each tattoo removal session will take from 10 to 30 minutes, but that depends on the size of the tattoo. The tattoo inks should begin to fade more and more within each session.

On some occasions, bleeding may occur during the tattoo treatment. The bleeding may be a result of the laser light dilating the blood vessels which could happen due to high consumptions of alcohol. It is required that the client abstain or moderate alcohol intake hours before to laser tattoo treatment.  Also, if the client used Roaccutane drug for their acne they should wait for 6 months before they get the treatment.

Pain felt during the laser tattoo removal sessions depends on the client and the size of the tattoos. However, the process is quick, so the pain is not going to last long.

What is after the laser tattoo removal treatments?

The immune system of each client varies, so the number of treatments needed cannot be certain. However, normally the tattoo removal treatment will have to take multiple sessions with 6 to 8 weeks of breaks in between depending on the results you want.

There could be white dots that you will see straight after the treatments which are normal and occur due to oxygen particles that were released and pushed to the surface during the tattoo removal treatment. Also, the skin treated may become darker or lighter than usual, however, this is temporary and usually lasts about 20 minutes. The tattoos ink is likely to appear again within that time and then shortly disappear within a few days (depending on the number of treatments). The skin should be carefully taken care of and in a way, that’s recommended from the medical consultation.

In the after care the client should use a soothing cream such as Aloe Vera and use a cold compress instead of ice to ease any discomfort.

The practitioner will ask to take a picture of the treatment area afterwards due to keeping records involved with rights protection.

If discoloured oozing appears on the treated area, make sure to contact a GP as soon as possible. Whenever unsure about your first laser treatment, please contact us as we can provide a free and highly helpful consultation. 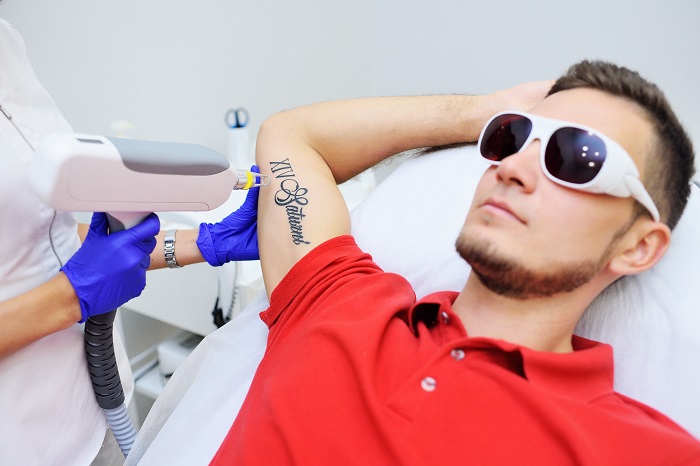 What are the risks of laser tattoo removal treatments?

Damage to the skin

The area treated may become red and some blushes may appear within hours after the treatment, but this should completely disappear in about 3 days time.

It is required that the tattoo removal treatment area is treated with precaution as it is likely to be extra sensitive towards the sun. The Beauty Laser Clinic recommends the SPF30 sun cream to be used in order to prevent any skin damage.

Side effects of the laser tattoo removal

In order to prevent any side effects or make them go away faster, you need to avoid using soap or perfumed products following the treatment. Also, any extreme physical exercise must be avoided for a few days after the treatment. Furthermore, the tattoo removal treatment area should be kept clean and dry with warm water (not too hot) and pat dry.

What are the results of the laser tattoo removal treatments?

This process is likely to fade your tattoo ink to a very satisfying level and provide permanent results. These vary per individual as some tattoos may be hard to completely remove and some tattoo colours don’t fade as well as others. However, this process is very safe and can be satisfying even for people with sensitive skin.

Find and contact the Beauty Laser Clinic in Lincoln, Lincolnshire

Call our Lincoln laser clinic and book your appointment now! We can service you with a highly helpful consultation about the treatment. Visit us on the address: 50a High St, Lincoln LN5 8AN

We use cookies to ensure that we give you the best experience on our website. If you continue to use this site we will assume that you are happy with it.OkPrivacy policy